These three black holes are going to crash into each other 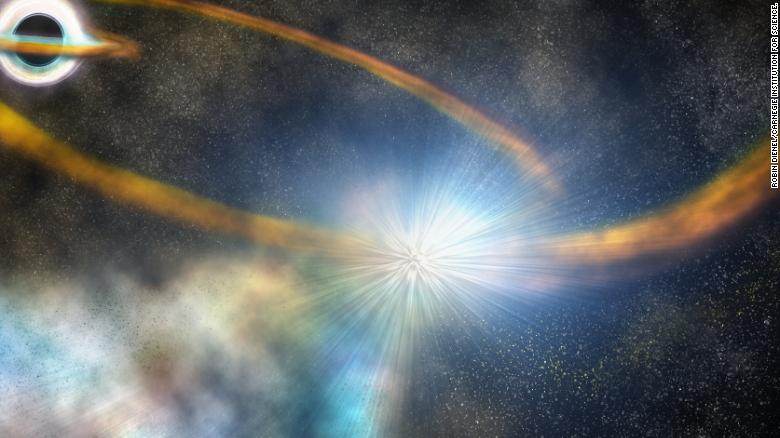 (CNN)When galaxies collide, so do the supermassive black holes at the center of each galaxy. For the first time, astronomers have observed a triple collision of galaxies, which have sent their black holes on a collision course, according to a new study.

The massive crash is located a billion light-years from Earth in the SDSS J084905.51+111447.2 system. To see it, astronomers needed to use telescopes on the ground and in space.

The Sloan Digital Sky Survey Telescope in New Mexico imaged the system in optical light. Follow-up by citizen scientists involved in the Galaxy Zoo project helped tag the system as a galactic collision.

Research on the rare triple system was published this week in The Astrophysical Journal.

“We were only looking for pairs of black holes at the time, and yet, through our selection technique, we stumbled upon this amazing system,” said study author Ryan Pfeifle, a graduate research assistant at George Mason University. “This is the strongest evidence yet found for such a triple system of actively feeding supermassive black holes.”

Such a massive collision sounds like it would appear more obvious. But three supermassive black holes gobbling material in the midst of a giant galactic merger creates a lot of gas and dust that can hide the event from our telescopes.

“Working under the assumption that this system of three galaxies does indeed merge together, the galaxy merger timescale – including coalescence of the black holes – should be on the order of 1 billion years,” Pfeifle said. “It’s important to keep in mind, though, that not all galaxies that appear to be ‘merging’ will actually end up ‘fully’ merged, so this timescale is fairly uncertain as there are a whole host of parameters that dictate this timescale. Sometimes you have fly-by interactions that look like an ongoing merger, but the galaxies never actually merge.”

The images and data captured in different wavelengths of light eventually provided all of the pieces necessary to reconstructing the galactic puzzle.

“Through the use of these major observatories, we have identified a new way of identifying triple supermassive black holes. Each telescope gives us a different clue about what’s going on in these systems,” Pfeifle said. “We hope to extend our work to find more triples using the same technique.”

Astronomers witness ‘one of the most extraordinary black hole systems’

Pairs of black holes have been observed before, but not a trio. A pair of black holes will merge into a larger one. Three should merge even quicker. Previously, astronomers have puzzled over the “final parsec problem,” where two black holes become close but need another factor to overcome their massive energy and actually merge. A third black hole could be that factor.

Another consequence of these merging black holes is gravitational waves or ripples in space and time.

“Dual and triple black holes are exceedingly rare,” said Shobita Satyapal, study co-author at George Mason University. “But such systems are actually a natural consequence of galaxy mergers, which we think is how galaxies grow and evolve.”