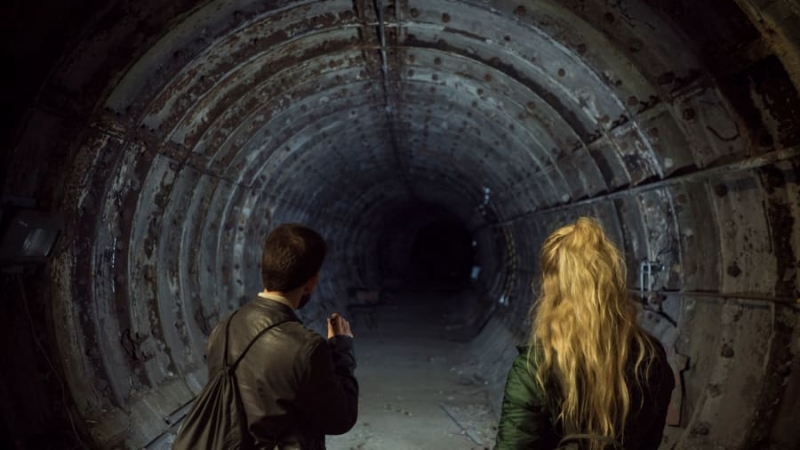 As the oldest subterranean railway network in the world, the London Underground has been through a lot of changes since it opened back in 1863.

Several stations have come and gone in the 150 years or so since then — some never actually opened in the first place.

Although many of the UK capital’s nonoperational stations, entrances and passageways are still standing, the majority have been closed to the public for decades.

But a new book from the London Transport Museum uncovers the secret world of London’s disused stations and underground structures.

“Hidden London: Discovering the Forgotten Underground” features dozens of images of the abandoned areas of the rapid public transit system known as the tube, as well as the stories behind them.

Down Street station, a disused stop in Mayfair where former UK prime minister Winston Churchill famously spent the night during World War II, is showcased along with Aldwych station in Central London, which closed around 100 years after it opened in 1907.

Meanwhile, the non-operational section of Charing Cross tube station, now regularly used as a filming location for blockbusters like “Skyfall” and “The Bourne Ultimatum,” is also included.

“People are fascinated by the London Underground,” Siddy Holloway, engagement manager at London Transport Museum and one of the authors of the book, tells CNN Travel.

“London has so many layers to it, being such an ancient city. There’s a sense that there’s always more going on than meets the eye.”

London Transport Museum has been running tours of some of the sealed-off stations across the city sporadically since the 1970s.

However, Hidden London, the museum’s exclusive program of tours and events at disused stations and secret sites, wasn’t launched until 2015.

It began with tours of Charing Cross station, Clapham South, Down Street, and Aldwych, before adding eight others, including the Clapham South deep-level shelter in south London and the abandoned tunnels of Euston in central London.

“We accumulated so much new information while researching the tours that we weren’t able to fit everything in,” explains Holloway. “That’s where the book was borne out of.”

Photographers Toby Madden and Andy Davies captured some of the eeriest parts of the underground world, such as the sealed tunnels located under the Thames and derelict passenger walkways, for the project, which will also form part of an upcoming exhibition at the London Transport Museum.

The booking office at Aldwych station, which closed in 1917.

“Each station has its own individual charm,” Holloway says. “Film aficionados like being able to stand in the old Jubilee line section of Charing Cross station, where Daniel Craig was running and sliding down escalators in “Skyfall.”

“Aldwych is a very beautifully preserved Edwardian station right in the heart of London, which is also used in films.

“And Down Street fascinates a lot of people because you can kind of glimpse it if you’re riding on the Piccadilly Line between Hyde Park Corner and Green Park. Also, it still has all the offices and facilities placed there for the duration of World War II.”

The design and architecture on display at the disused stations is captivating, particularly the Edwardian ticket hall tiling design at the non-operational York Road station, located between King’s Cross and Caledonian Road, and the original ticket office at Aldwych.

Some were shut to make way for sites more equipped for elevators, others were terminated to help speed up the network as London’s population grew and the tube got busier, while others closed so they could be turned into ventilation shafts.

Of course, taking groups of visitors, along with photographers into underground areas that have been closed for decades is no easy task.

The ratio of visitors to staff during the visits has to be very high to ensure safety, while all workers involved must have extensive training in emergency procedures.

“Most of the sites are non-accessible because they’ve been closed for so long, some of them for 80 or 90 years, so there are many trip hazards,” explains Holloway. “It’s a real exploration. People have to have their wits about them.

“We’re going behind the scenes of one of the busiest networks in the world, so we have to be adequately prepared for any scenario.”

In fact, some of the stations featured in the book are still almost completely inaccessible for this very reason.

King William Street, the oldest, disused deep tube station in London, remains out of bounds as it only has a single entry and exit point.

“When taking people into a disused space, we always ensure there’s a secondary exit point,” explains Holloway. “You have to provide an adequate escape route.”

However, the team at Transport for London are intent on adding more disused areas to their program, with the old part of Moorgate station in the City of London next on the horizon.

“It’s the lure of the unknown that makes it so appealing,” says Holloway. “The visceralness of being able to go into completely unique spaces.

“The program is becoming more robust as we gain access to more and more sites.”