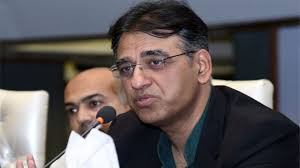 BEIJING: Former Finance Minister Asad Umar told the Chinese media that China-Pakistan Economic Corridor (CPEC) has a rich potential of Pakistan’s economic growth and it meets the common aspirations of the people.

CPEC has delivered benefits to both China and Pakistan, a Pakistani official said, questioning the double standards of certain countries on investment and rebutting the “debt trap” allegations.

The unfounded charges hurled at China’s investment in foreign countries are designed to create ill feelings among people by attempting to cast aspersions on motives of Chinese investment, said Asad Umar, who is currently chairman of Pakistan’s National Assembly Standing Committee on Finance.

The former finance minister defended the CPEC, a major project within the framework of the China-proposed Belt and Road Initiative (BRI), in his interview with Xinhua.

Umar said that early projects of the CPEC have been completed, but there are still projects under construction such as port infrastructure, power plants and road networks.

The CPEC with more potential to be tapped will help boost economic development in Pakistan in the future, he said.

“China is assisting Pakistan in building basic infrastructure,” Umar said. “To take full advantage of the infrastructure, industrialization and business cooperation in the private sector are needed at the next step.”

When the International Monetary Fund (IMF) team visited Pakistan, the Pakistani government shared the required details of the Chinese loan and the IMF team found the Chinese loan “so simple and clear,” Umar said.

Umar also cited statistics and facts to refute the much-hyped “debt trap” allegations on the CPEC and BRI, saying that only 10 percent of Pakistan’s total public debt is from China, while the remaining are all from other countries and organizations, but no one raises doubt about the remaining 90 percent of the loans or calls it a “debt trap.”

“Why is investment from any other part of the world a good thing, but from China, it turns evil?” Umar asked.