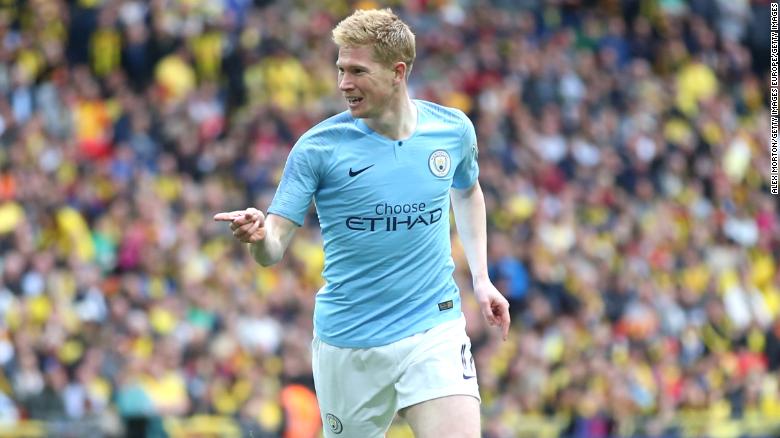 (CNN)It’s been the case for quite some time that there are no longer 20 managers involved in the world’s most popular football league, but rather millions — more than six million during the 2018/19 season — agonizing over a squad of 15 players with a mere budget of £100 million ($122m) .

I know, right? £100 million! That’s barely enough to buy a handful of average-to-good English Premier League players, let alone 15 of them. But that’s the least of my issues. Welcome to the weird and wonderful world of Fantasy Premier League.

The moment I realized that my interest in this particular version of the (free to play) game — which the English Premier League has officially sanctioned since a mere 18,000 played when it launched back in 2002 — was tipping over from a hobby to obsession was when I asked a former top-flight winning manager — no names but he has since bid adieu to English football — how often he would be selecting a new signing, since this defender was such good value in the game (£5 million if I recall. And believe me — I recall).

A raised eyebrow and the merest hint of a smile was the closest I got to a response. Let’s just say that said defender was not a regular.

If you think I feel guilty about putting the legendary manager on the spot, think again: apparently Prince Abdullah bin Mosaad of Saudi Arabia, once telephoned George Gillett, when the American was the co-owner of Liverpool, to find out if Steven Gerrard was going to play, such was his level of interest.

His squad should make for interesting reading this season, considering the Prince is currently the co-owner of newly promoted Sheffield United.

But whether you are a Prince or a pauper who plays, the eternal question for millions of us is whether to go for a 3-4-3 or the traditional 4-4-2 formation.

By the way, I’ll defend my love of the 3-4-3 until my final team selection in the 2099/2100 season when a still sprightly Cristiano Ronaldo returns to Manchester United and continues to score goals and assists for fun.

Then there’s the captaincy dilemma — double points at stake! — to say nothing of those infernal “chips” (such as being able to play all your substitutes in one game week) and how best to make the most of a wildcard, where you can transfer out as many of your squad and not take a four-point hit for every outgoing player, outside of the one free transfer you can make each week (two freebies if you can maintain your discipline and roll the transfer over to another week — as if anyone with a pulse can do that).

And if you thought an encyclopedic knowledge of the players would help, well, you need help.

I’ve played in mini-leagues against opponents who are self-confessed newbies, and barely have a passing interest in the game (real or fantasy) and have selected Liverpool’s Mohamed Salah or Tottenham’s Harry Kane as captain in week one and — ahem — NOT CHANGED THE CAPTAINCY FOR THE REST OF THE SEASON, EVEN IF THE PLAYER GOT INJURED!!! and they have still managed to comfortably beat me for many of the 38 game weeks.

I’m a lifelong football fan, been covering the sport professionally for the best part of 20 years, spend hours a week on my team selection, and I’m now expecting to score fewer points than any Johnny or Joanna come lately.

But it’s the real managers — those 20 hapless souls who are never seemingly more than three consecutive defeats away from losing their actual job — that are the people who truly infuriate.

Take Pep Guardiola. He might be in contention for being the world’s best manager but any regular FPL player will be well accustomed to “Pep Roulette.”

This refers to the Manchester City boss having a propensity for chopping and changing his real line-up with such regularity, that none of his world class players — apart from arguably goalkeeper Ederson (£6 million if I recall. And believe me — oh never mind) — is a surefire selection in his side.

There have been plenty of occasions in which Guardiola’s lethal striker Sergio Aguero (£12m) has made my weekend. Indeed, the five goals the Argentine once scored in the span of 20 minutes against Newcastle in 2015 on a game week I captained him (50 points!) is up there with the elation I experienced with the birth of my children.

Wait, who am I kidding, that’s taking it a tad too far … I had nine months to prepare for the arrival of the kids — you only get a week to make the crucial captaincy call.

But even the awesome Aguero is subject to being dropped by the heartless Guardiola, who may or may not have any idea how he’s not only ruining his actual player’s day, but the weekend of us millions of managers around the world.

That said, I stand by the well-worn mantra, “if the question is Fantasy Premier League, the answer is Aguero.”

I’m serious: Aguero once scored a hat-trick against the team I actually support … and I was happy about it — we were on the verge of getting relegated anyway.

Nowadays, in the social media dominated landscape of 2019, players have been known to comment on their performances from an FPL standpoint, though I still think it will be tough to top the then West Bromwich Albion goalkeeper Ben Foster “dropping” Manchester United’s Robin van Persie from his team during the 2012/13 campaign.

Foster was set to face the Dutch striker, and the prospect of the WBA keeper accruing points for his FPL team by conceding goal/s to RVP, would have been a conflict of interest surely too much to comprehend.

And ever the realist, the recently retired striker Peter Crouch once took the painful decision to leave himself out from his team, because he wasn’t performing on the pitch for Stoke City. Guess what? His replacements outperformed him.

So as Liverpool great Gerrard once said: “We go again.”

The 2019/20 season is nearly upon us and I’m almost certain this is the year my squad comes out on top.

When looking for an omen, I’ve settled on my near namesake, and no relation, the New Zealander Adam Levy, beating out the more than 6.3 million managers last season to win the game.

I have committed to memory the game’s Scout recommendations, even if every single player seems worthy of consideration.

I have the perfect blend of “premium” and “budget” players. I promise not to tinker with my selection (too much). And I retain an unwavering faith in Aguero. But if you happen to see Guardiola this week, would you mind asking for a friend whether he’s planning to play him?