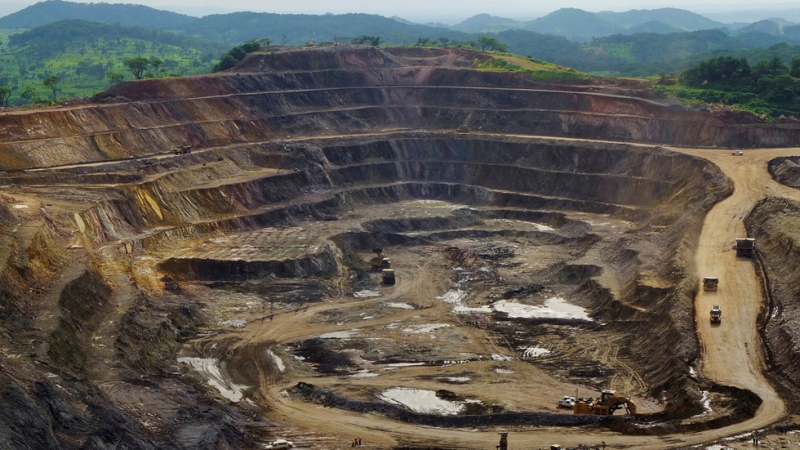 A future of environment-friendly energy, where dirty engines and power plants rust in history’s scrapyard, is an idyllic vision. In the cynical real world, the rush for green batteries is fueling a harmful mining boom.

By 2030, there will be 140 million electric cars on Earth, and by 2040 every third vehicle will be powered by green electricity instead of the fossil fuels that have been slowly choking the environment for the past couple centuries. That’s according to assessments by Glencore Plc and BloombergNEF.

Sounds like we’re on the right track and Greta Thunberg’s zero-emission dream could be achieved within her lifetime. Humanity is finally coming to its senses.

Not quite. All those cars will need batteries, and all those batteries will need to be built with a small periodic table of minerals. And all those minerals need to be mined – in some cases strip-mining the rest of the planet’s explored deposits.

The rush is already on. The world’s top mining corporations are starting to carve up the growing market for lithium, nickel, cobalt, copper, platinum and palladium – all key materials in making electric vehicle (EV) batteries.

And they will have to start digging if they want to keep up. It’s estimated that 3 million more tons of copper will have to be mined per year to feed the production of 140 million EVs by 2030 – and that’s copper, the most recycled metal on Earth. Nickel mining will have to increase by 1.3 million tons per year, and cobalt by 263,000 tons.

Those are just batteries. Electric cars also need engines, and solar and wind generators – without which a green future is unimaginable – will also gobble up those materials, including more obscure ones like tellurium and neodymium.

Demand is set to exceed supply – which is why those mining giants are rushing to increase theirs (and make a good buck along the way). In some cases, demand will exceed the supply offered by the planet – at least the feasibly-minable reserves we have discovered so far.

ALSO ON RT.COMCarmakers face supply bottleneck of this crucial metal

Lithium, the mineral central to building modern batteries, is extracted from salt via giant evaporation ponds. The process is cost-effective, but uses up enormous amounts of water. In parts of South America’s ‘lithium triangle’, farmers have to bring water in from elsewhere, while the local groundwaters are being pumped up to the surface and left to evaporate and leave behind lithium-rich salt.

Meanwhile in Tibet, there were cases when toxic chemicals used in refining lithium leaked into a river, causing massive wildlife die-offs. That mine even got shuttered in 2013, but was reopened three years later.

Brine pools of SQM lithium mine on the Atacama salt flat in the Atacama desert of northern Chile, January 10, 2013 ©  Reuters / Ivan Alvarado

Copper mines have caused devastating wastewater spills, like the one that turned Sonora and Bacanuchi rivers in Mexico a rusty orange in August 2014, causing serious health problems in hundreds of locals.

Artisanal cobalt mining in the Democratic Republic of the Congo, where most of the mineral comes from, kicks up clouds of toxic mineral dust, whose effects are exacerbated with a lack of regulation, combined with reported human rights abuses –including child labor– at the mines.

Nothing is fully renewable yet

One big problem with going renewable all the way is that humans have not yet discovered a way to make any energy technology 100 percent renewable. Batteries we can currently make have a lifespan – a modern lithium battery, drained and recharged over and over, only maintains enough capacity to run an electric car for about 10 years (granted, it can then theoretically be repurposed for something less demanding).

And those rare earth reserves are not infinite, says Dr. Parakram Pyakurel, postdoctoral researcher at the Warsash School of Maritime Science and Engineering.

“While there is no hard limit (energy efficiency technology, discovery of new reserves etc. will stretch the limit), rare metals/minerals like cobalt, lithium etc. are non-renewable and will eventually run out,” he told RT in an email.

Reusing and recycling batteries and other equipment can go a long way to offsetting the growing demand for rare earth minerals – but for humanity to ascend into a renewable future, implementing that cycle on a meaningful scale will require tremendous effort. Common standards for batteries would need to be worked out. Recycling would need to be stepped up dramatically – currently only about five percent of all Li-ion batteries are being recycled in the US and Europe. Even so, it is technically impossible to recycle 100 percent of the lithium used in a battery.

And while environmentalists and energy researchers wrestle with this conundrum, mining corporations are defaulting to what they do best: more digging.

In the end, even if the corporations only understand demand and profit, all that harmful mining is supposed to contribute to a brighter, wind- and sun-powered, zero-emission future. So maybe the trade-off of harming the environment now is worth it, and Earth will heal itself once we’ve gone green?

The problem is that the green future is still a vague, if beautiful, specter on the horizon – while the drill-scarred and salt-parched earth and polluted rivers are already a reality – one that will likely get worse as we feed the mineral-hungry renewables.

A reservoir tainted with waters from a closed copper mine, in the Republic of Khakassia, Russia ©  Reuters / Ilya Naymushin

The bottom line is, while switching to an electric car sounds like an obvious step to going green, their hidden costs mean they are not as clean as advertised.

“It is noteworthy that when automobiles first arrived, they were marketed as ‘clean’ because there would be no more horse manure to deal from horse carriages. The same is likely to happen with renewable energy and EVs!” Dr. Pyakurel believes.