In the vast garden of the universe, the heaviest black holes grew from seeds. Nourished by the gas and dust they consumed, or by merging with other dense objects, these seeds grew in size and heft to form the centers of galaxies, such as our own Milky Way. But unlike in the realm of plants, the seeds of giant black holes must have been black holes, too. And no one has ever found these seeds — yet.

One idea is that supermassive black holes — the equivalent of hundreds of thousands to billions of Suns in mass — grew from a population of smaller black holes that have never been seen. This elusive group, the “intermediate-mass black holes,” would weigh in somewhere between 100 and 100,000 Suns. Among the hundreds of black holes found so far, there have been plenty of relatively small ones, but none for sure in the intermediate mass-range “desert.”

Scientists are working with powerful space telescopes from NASA, as well as other observatories, to track down far-flung objects that fit the description of these exotic entities. They have found dozens of possible candidates, and are working toward confirming them as black holes. But even if they do, that opens up a whole new mystery: How did intermediate-mass black holes form?

“What is fascinating, and why people have spent so much time trying to find these intermediate-mass black holes, is because they shed light on processes that happened in the early universe, what were the masses of relic black holes, and new formation mechanisms for black holes that we haven’t thought of yet,” said Fiona Harrison, professor of physics at Caltech in Pasadena, California, and principal investigator for NASA’s NuSTAR mission.

A black hole is an extremely dense object in space from which no light can escape. When material falls into a black hole, it has no way out. And the more a black hole eats, the more it grows in both mass and size.

The smallest black holes are called “stellar mass,” with between 1 and 100 times the mass of the Sun. They form when stars explode in violent processes called supernovae.

Supermassive black holes, on the other hand, are the central anchors of large galaxies – for example, our Sun and all other stars in the Milky Way orbit a black hole called Sagittarius A* that weighs about 4.1 million solar masses. An even heavier black hole — at a whopping 6.5 billion solar masses — serves as the centerpiece for the galaxy Messier 87 (M87). M87’s supermassive black hole appears in the famous image from the Event Horizon Telescope, showing a black hole and its “shadow” for the very first time. This shadow is caused by the event horizon, the black hole’s point of no return, bending and capturing light with its strong gravity.

Supermassive black holes tend to have disks of material around them called “accretion disks,” made of extremely hot, high-energy particles that shine bright as they get closer to the event horizon— the black hole’s region of no return. Those that make their disks shine brightly because they eat a lot are called “active galactic nuclei.”

The density of matter needed to create a black hole is mind-boggling.  To make a black hole 50 times the mass of the Sun, you would have to pack the equivalent of 50 Suns into a ball less than 200 miles (300 kilometers) across. But in the case of M87’s centerpiece, it is as though 6.5 billion Suns were compressed into a ball wider than the orbit of Pluto. In both cases, the density is so high that the original material must collapse into a singularity— a rip in the fabric of space-time.

Key to the mystery of black holes’ origins is the physical limit on how fast they can grow. Even the giant monsters at the centers of galaxies have limitations on their feeding frenzies because a certain amount of material is pushed back by the high-energy radiation coming from hot particles accelerated to near the event horizon. Just by eating surrounding material, a low-mass black hole might only be able to double its mass in 30 million years, for example.

“If you start from a mass of 50 solar masses, you simply cannot grow it to 1 billion solar masses over 1 billion years,” said Igor Chilingarian, an astrophysicist at the Smithsonian Astrophysical Observatory, Cambridge, Massachusetts, and Moscow State University. But, “as we know, there are supermassive black holes that exist less than 1 billion years after the formation of the universe.” 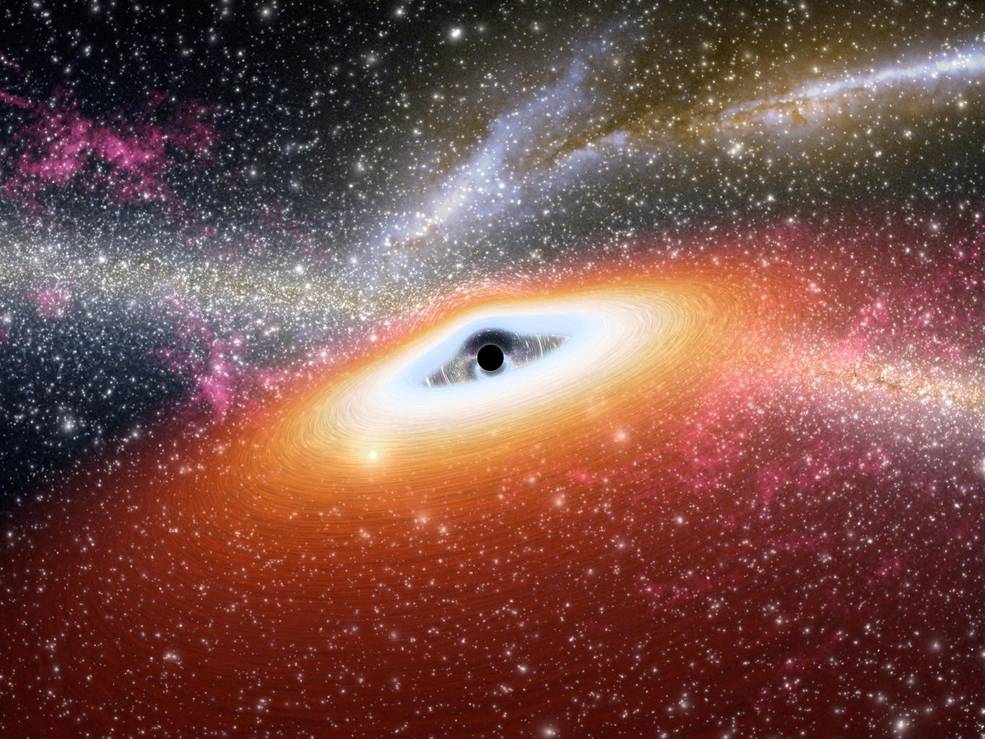 This artist’s conception illustrates one of the most primitive supermassive black holes known (central black dot) at the core of a young, star-rich galaxy.
Credits: NASA/JPL-Caltech

How to make a black hole you can’t see

Early in the universe’s history, the seed of an intermediate-mass black hole could have formed either from the collapse of a large, dense gas cloud or from a supernova explosion. The very first stars that exploded in our universe had pure hydrogen and helium in their outer layers with heavier elements concentrated in the core. This is a recipe for a much more massive black hole than exploding modern stars, which are “polluted” with heavy elements in their outer layers and therefore lose more mass through their stellar winds.

“If we’re forming black holes with 100 solar masses early in the universe, some of them should merge together, but you basically then should produce a whole range of masses, and then some of them should still be around,” said Tod Strohmayer, astrophysicist at NASA’s Goddard Space Flight Center, Greenbelt, Maryland. “So then, where are they, if they did form?”

One clue that intermediate-mass black holes could still be out there came from the National Science Foundation’s Laser Interferometer Gravitational-Wave Observatory, LIGO, a collaboration between Caltech and the Massachusetts Institute of Technology. LIGO detectors, combined with a European facility in Italy named Virgo, are turning up many different mergers of black holes through ripples in space-time called gravitational waves.

In 2016, LIGO announced one of the most important scientific discoveries of the last half-century: the first gravitational wave detection. Specifically, the detectors based in Livingston, Louisiana, and Hanford, Washington, picked up the signal of two black holes merging. The masses of these black holes: 29 and 36 times the mass of the Sun, respectively, surprised scientists. While these are still not technically intermediate-mass, they are large enough to raise eyebrows.

It’s possible that all of the intermediate-mass black holes have already merged, but also that technology hasn’t been fine-tuned to locate them. 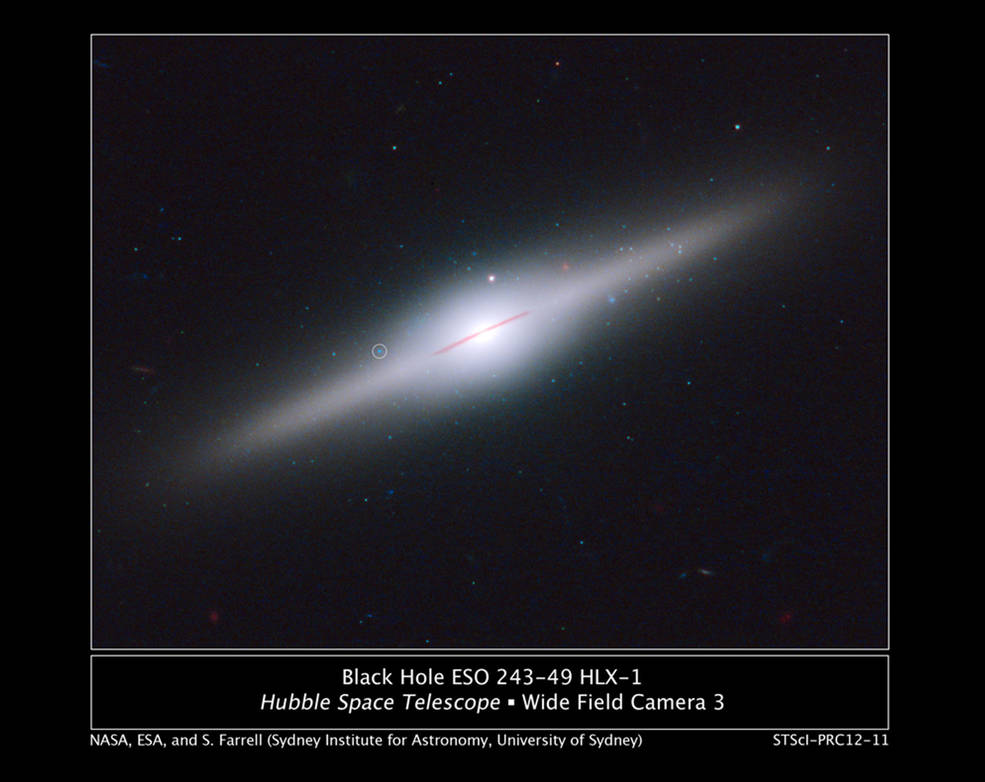 A galaxy called ESO 243-49, is home to an extremely bright object called HLX-1. Circled in this image, HLX-1 is the most likely example of a black hole in the intermediate mass range that scientists have found.
Credits: NASA; ESA; and S. Farrell, Sydney Institute for Astronomy, University of Sydney

So where are they?

Looking for black holes in the intermediate-mass desert is tricky because black holes themselves emit no light. However, scientists can look for specific telltale signs using sophisticated telescopes and other instruments. For example, because the flow of matter onto a black hole is not constant, the clumpiness of consumed material causes certain variations in light output in the environment. Such changes can be seen more quickly in smaller black holes than larger ones.

“On a timescale of hours, you can do the observational campaign that for classical active galactic nuclei takes months,” Chilingarian said.

The most promising intermediate-mass black hole candidate is called HLX-1, with a mass of about 20,000 times the Sun’s. HLX-1 stands for “Hyper-Luminous X-ray source 1,” and its energy output is a lot higher than Sun-like stars. It was discovered in 2009 by Australian astronomer Sean Farrell, using the European Space Agency’s XMM-Newton X-ray space telescope. A 2012 study using NASA’s Hubble and Swift space telescopes found suggestions of a cluster of young blue stars orbiting this object. It may have once been the center of a dwarf galaxy that was swallowed by the larger galaxy ESO 243-49. Many scientists consider HLX-1 a proven intermediate-mass black hole, Harrison said.

“The colors of X-ray light it emits, and just the way it behaves, is very similar to a black hole,” Harrison said. “A lot of people, including my group, have programs to find things that look like HLX-1, but so far none are consistent. But the hunt goes on.”

Less-bright objects that could be intermediate-mass black holes are called ultraluminous X-ray sources, or ULXs. A flickering ULX called NGC 5408 X-1 has been especially intriguing to scientists looking for intermediate-mass black holes. But NASA’s NuSTAR and Chandra X-ray observatories astonished scientists by revealing that many ULX objects are not black holes— instead, they are pulsars, extremely dense stellar remnants that appear to pulse like lighthouses.

M82 X-1, the brightest X-ray source in the galaxy M82, is another very bright object that seems to flicker on timescales consistent with an intermediate-mass black hole. These changes in brightness are related to the mass of the black hole, and are caused by orbiting material near the inner region of the accretion disk. A 2014 study looked at specific variations in X-ray light and estimated that M82 X-1 has a mass of about 400 Suns. Scientists used archival data from NASA’s Rossi X-ray Timing Explorer (RXTE) satellite to study these X-ray brightness variations.

Most recently, scientists investigated a bigger group of possible intermediate-mass black holes. In 2018, Chilingarian and colleagues described a sample of 10 candidates by re-analyzing optical data from the Sloan Digital Sky Survey and matching the initial prospects with X-ray data from Chandra and XMM-Newton. They are now following up with ground-based telescopes in Chile and Arizona. Mar Mezcua of Spain’s Institute for Space Sciences led a separate 2018 study, also using Chandra data, finding 40 growing black holes in dwarf galaxies that could be in that special intermediate mass range. But Mezcua and collaborators argue these black holes formed originally in the collapse of giant clouds, rather than by originating in stellar explosions. 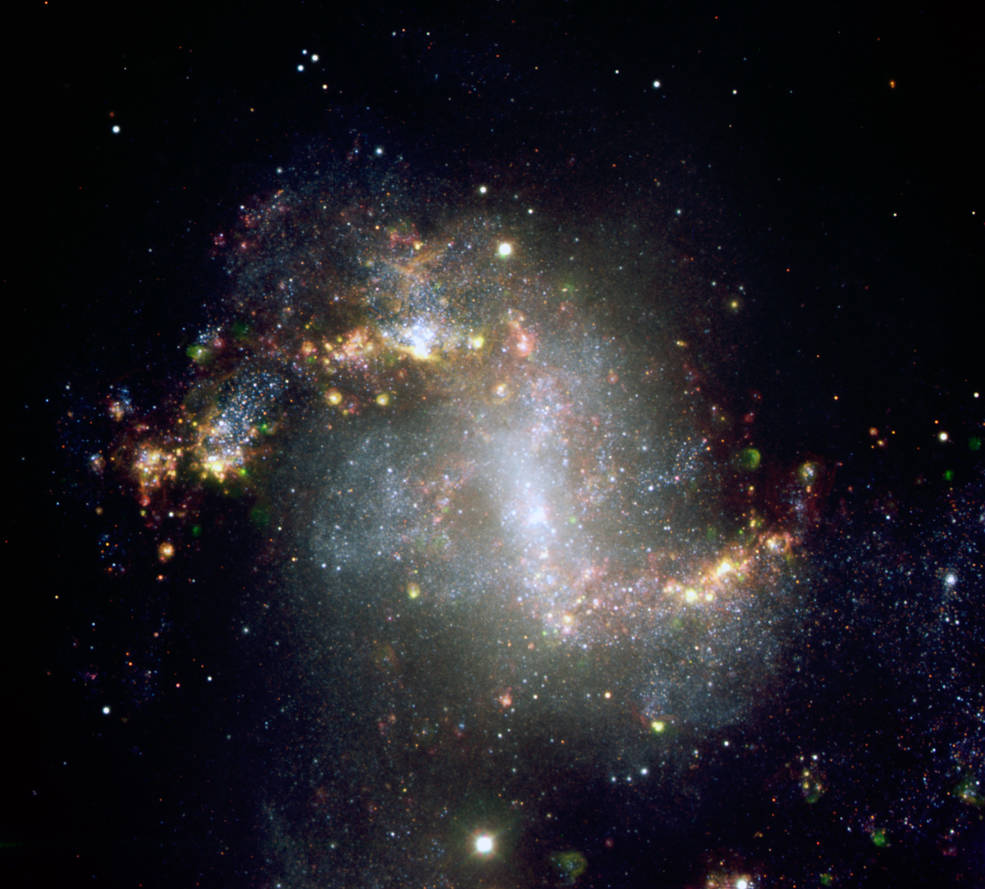 This image, taken with the European Southern Observatory’s Very Large Telescope, shows the central region of galaxy NGC1313. This galaxy is home to the ultraluminous X-ray source NCG1313X-1, which astronomers have now determined to be an intermediate-mass black hole candidate. NGC1313 is 50,000 light-years across and lies about 14 million light-years from the Milky Way in the southern constellation Reticulum.
Credits: ESO

Dwarf galaxies are interesting places to continue looking because, in theory, smaller star systems could host black holes of much lower mass than those found in the centers of larger galaxies like our own.

Scientists are also searching globular clusters — spherical concentrations of stars located in the outskirts of the Milky Way and other galaxies — for the same reason.

“It could be there are black holes like that, in galaxies like that, but if they’re not accreting a lot of matter, it might be hard to see them,” Strohmayer said.

Intermediate-mass black hole hunters eagerly await the launch of NASA’s James Webb Space Telescope, which will peer back to the dawn of the first galaxies. Webb will help astronomers figure out which came first — the galaxy or its central black hole — and how that black hole might have been put together. In combination with X-ray observations, Webb’s infrared data will be important for identifying some of the most ancient black hole candidates.

Another new tool launched in July by the Russian space agency Roscosmos is called Spectrum X-Gamma, a spacecraft that will scan the sky in X-rays, and carries an instrument with mirrors developed and built with NASA Marshall Space Flight Center, Huntsville, Alabama. Gravitational-wave information flowing from the LIGO-Virgo collaboration will also aid in the search, as will the European Space Agency’s planned Laser Interferometer Space Antenna (LISA) mission.

This fleet of new instruments and technologies, in addition to current ones, will help astronomers as they continue to scour the cosmic garden for seeds of black holes, and galaxies like our own.